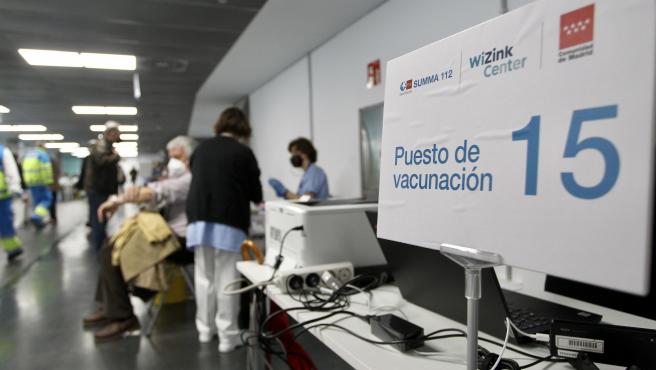 The scientific community is debating the need for a third booster dose of the covid vaccine . While Israel has already started administering Pfizer’s third prick to people with weak immune systems, France has announced that from September it will also reimmunize those who were vaccinated earlier and China is considering reinforcing the vaccination of its population, mostly inoculated with locally manufactured inactivated virus antigens, with an additional dose of the messenger RNA vaccine developed by Pfizer and BioNTech.

Indonesia and ThailandThey also plan to do it with health personnel. England is considering administering it next autumn simultaneously with the flu campaign. Meanwhile, the US believes that, for the moment, it is not necessary .

Pfizer is still working on a possible third dose but there is no data yet on its “effects and consequences”
Pharmaceuticals, for their part, are rushing to study and present the results of a third dose of their formulas. Pfizer has already requested authorization from the US regulator (FDA). Moderna has also announced that a booster dose of its vaccine increases neutralizing antibodies against new variants of SARS-CoV-2, the virus that causes covid-19. AstraZeneca , for its part, has started a study to test the efficacy of a third dose against the Beta strain.

Like the US FDA , the European Center for Disease Prevention and Control ( ECDC ) believes that, in the absence of data on long-term vaccine protection, it is “too early” to know if a covid vaccine booster. Precisely this Thursday Pfizer admitted that there is still no data on its “effects and consequences . ” And in this line the experts consulted for 20 minutes speak .

“Those vaccinated will become infected and we will strengthen our natural immunity”
The professor of Cell Biology at the Pablo de Olavide University in Seville and associate researcher at the Andalusian Center for Developmental Biology Guillermo López Lluch maintains that ” there is still no evidence that indicates that a third dose is needed .” The immunity expert explains that current vaccines against covid protect against severe disease but not against contagion or mild symptoms: ” The vaccine makes the disease (of the covid) a cold .”

This is so because, says López, currently authorized vaccines produce antibodies that are released into the blood, of the immunoglobulin G (IgG) type, but they do not produce IgA type antibodies, which are the ones that are in the mucous membranes of our throats , where it begins. the infection. Therefore, “it is unnecessary to vaccinate with booster doses” because current vaccines cannot prevent infection.

So far, “laboratory data” show that antibody levels “appear promising” in the young, while in the elderly they offer a “less potent” immune response.
On the sidelines would be immunosuppressed people , who “would need the booster dose.”

In this sense, Isabel Sola, a CSIC scientist who is developing one of the Spanish vaccines against the coronavirus, adds that, for now, the available “laboratory data” show that antibody levels “seem promising” in people young people, while in the elderly they offer an immune response that is “considerably less powerful” . This would lead to think that “booster doses could be necessary in the elderly, because their immune response is much lower than that of the young.”

The vice president of the Spanish Association of Vaccination, Fernando Moraga-Llop, agrees with both, who believes that “in the short term there will be a group of patients with immunodeficiencies and highly vulnerable adults who are foreseeably necessary for a third dose.” On the contrary, it differs from administering a booster to the general population, “especially at a time when vaccines do not reach the third world”, since it would give rise to a ” problem of vaccine equity “.

This is also the argument of the World Health Organization (WHO) , which on Monday also warned that ” there is not enough evidence to say that a booster dose will be necessary. The full vaccination schedule provides good protection.” He also asked countries to reconsider the administration of booster doses with a “global perspective” , since there are many places in the world where vaccination campaigns have only taken off at a very slow pace.

When will we know if the memory is necessary?
So when will we know if a booster dose is necessary? Isabel Sola is very didactic: “You have to be very attentive to whether or not reinfections occur, that is, if the protection with the first doses begins to decline. At the moment that is not being seen because the vaccinated who become infected have a form mild disease, but they do not suffer from severe disease and that means that the vaccine continues to protect them. ”

However, he continues, “if, for example, from next month we began to see reinfections of vaccinated elderly people who must be admitted and even who unfortunately dieThat would indicate that protection is low and there would be a greater imperative to direct these people a new vaccine, since they are the ones that require the most hospitalizations and the most deaths may suffer “.

People over 80 years of age who do not live in residences have already begun to be vaccinated in nine autonomous communities. Today they have premiered in Galicia and La Rioja. Madrid and the Valencian Community will start this week. In the Community of Madrid, it will be done in health centers and retired doctors will be hired to volunteer to reinforce the campaign. For the month of April, when the vaccination is massive, the Generalitat Valenciana has announced that it will use the City of Arts and Sciences.

An 80-year-old man dies from Covid in Barcelona who was vaccinated with the two doses
It should be remembered that the oldest people are the ones who have been vaccinated the longest, since in Spain it began on December 28, 2020 to immunize the elderly in nursing homes and progress has been made in the vaccination campaign following the criteria of age as the main risk factor. Recently, an 80-year-old man has died of covid in Barcelona despite being vaccinated . In this case, according to Moraga-Llop, “this person had developed a very poor response to vaccination.”

The expert cites this case to explain that “it is difficult to assess whether vaccinated people are really immunized because, despite being vaccinated, you may not develop a good response, or because, despite testing negative for antibodies, you may you do have memory cells. ” For this reason, he disagrees with inoculating a memory prick to the most vulnerable before the general population.

“The great unknown”
For the moment, the researcher Isabel Sola asks for “patience” and “to follow the evolution in two ways”: on the one hand, to reach a sufficiently high level of group immunity as soon as possible to limit the transmission of the virus and therefore of infections, hospitalizations and deaths; and, on the other hand, follow the evolution of immunity and its duration in those vaccinated . “That is the great unknown and that will tell us whether or not there is a need to reinforce vaccination with extra doses. If this is the case, the greatest candidates to need it will be those who respond the worst, who are the elderly or people with problems in their immune response “, he concludes.

His colleague Guillermo López Lluch is optimistic and believes that the immunity will last “for a long time . ” Although “no one knows because we have just been vaccinated,” he continues, “as time goes by, we see that immunity continues.”

“We will naturally strengthen our immunity against even newer variants”
The researcher adds an option that virologists also contemplate: contagion after vaccination , which would also reinforce the body’s immune response . “We assume that those vaccinated are going to get infected,” says López Lluch, while citing his colleague from the CSIC, Margarita del Val , who in a joint seminar stated that “we are all going to get infected sooner or later, but the important thing is that infects you already vaccinated “.

In this way, the scientist from the Pablo de Olavide University abounds, ” we are going to naturally strengthen our immunity against even new variants , with which a booster dose would be unnecessary if in the end the coronavirus stays with us in good shape. of an endemic virus that affects us like a cold, just as the four types of coronavirus that cause a cold in humans affect us. Natural immunity would take the reins, “he predicts.

WHO Warning
This week, the World Health Organization (WHO) warned that it would be “chaos” if people on their own and outside the national health systems of their countries could buy and administer booster doses individually .

Moraga-Llop strongly discourages it and believes that this “cannot be allowed” at this time, although it does contemplate the possible future scenario in which “within two or three years, if the coronavirus remains endemic, (the vaccine) can be sell in pharmacies like the flu now. ”

Mess with alleged WHO warning about mixing covid vaccines and booster doses
For his part, López Lluch considers that these alleged practices are “authentic nonsense” and warns: ” No one should self-medicate or self- vaccinate. Administering a vaccine is not easy, it can produce side effects, sometimes very rare, other times more frequent such as allergic reactions or fever. ”

What vaccine could be given?
Both Guillermo López Lluch and Fernando Moraga-Llop point out that the booster dose – “better than third, since not all current ones are two doses” (Janssen is single-dose) – could be received from any approved vaccine, regardless of which one. it would have been received in the first full schedule .

“All the vaccines that are being used are immunizing against protein S and therefore any vaccine could be recognized by T cells or B lymphocytes, which have to produce antibodies against protein S, regardless of the vaccine used. Anyone could produce the same answer “, answers López Lluch.