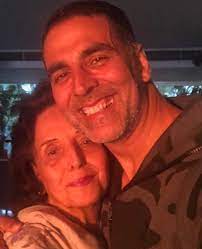 Actor Akshay Kumar’s mother Aruna Bhatia passed away on Wednesday at the age of 77. He was cremated at the Vile Parle crematorium in Mumbai. Akshay’s wife Twinkle Khanna, daughter Nitara, other family members and friends attended the funeral. Many celebs including Rohit Shetty, Riteish Deshmukh, Sajid Khan, Ramesh Taurani also reached there.

A day before Akshay’s birthday, mother said goodbye to the world
Aruna Bhatia was admitted to Hiranandani Hospital in Mumbai a few days ago due to age-related problems. There he was kept in the ICU for the last 6 days. He also had diabetes. Aruna breathed her last a day before her son Akshay’s birthday. Akshay Kumar’s birthday falls on 9 September.

Akshay Kumar suddenly returned from Britain after his mother’s health deteriorated. There he was shooting for the movie ‘Cinderella’. Coming to India, he gave updates to the fans about his mother’s health and wrote, “The concern you have expressed for my mother’s health touched my heart. I cannot express it in words. This is a very difficult time for me and my family. Your every single prayer will prove to be very helpful.”

Akshay’s film ‘Airlift’ co-star Nimrat Kaur commented, “Deeply saddened for your profound loss. Deepest condolences and my heartfelt prayers to you and the entire family at this critical time. Satnam Wahe Guru Akshay.”

Shooting of Akshay’s projects was not stopped
Akshay has not stopped the work of his projects. He has asked the producers to continue shooting for those scenes which do not require his presence. Akshay Kumar has about half a dozen films in the pipeline till next year. The superstar has 9 projects. 8 movies and a web series. These are- Sooryavanshi, Atrangi Re, Prithviraj, Bachchan Pandey, Rakshabandhan, Ram Setu, OMG-Oh My God 2 and web series The End.