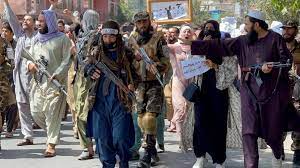 The Taliban have announced their interim government in Afghanistan. Mullah Hassan Akhund has been appointed as the interim Prime Minister of Afghanistan. The decision comes two weeks after the radical Islamist group took control of much of Afghanistan, including the capital Kabul. The Conversation asked Ali A Olomi, a historian of West Asia and Islam at Penn State University, to know who Mullah Akhund is and what his appointment signifies for Afghanistan amid concerns about human rights in the war-ravaged country.

Who is Mulla Hassan Akhund?
Mullah Akhund is an interesting and mysterious figure in the Taliban. He has been an influential figure in Afghanistan since the founding of the extremist group in the 1990s. But unlike other Taliban leaders of the time, he was not involved in the Soviet-Afghan war of the 1980s. Taliban founder Mullah Mohammad Omar and his comrades fought alongside the Mujahideen—a disorganized network of anti-Soviet Afghan fighters—but Akhund was not among them.

In fact, he is seen more as a religiously influential figure in the Taliban. He served on the Taliban’s shura councils, a traditional decision-making body composed of religious scholars and mullahs (a respect given to people trained in Islamic theology). Akhund is perhaps better known as one of the persons responsible for the destruction of the ‘Buddha of Bamiyan’. In the Bamiyan Valley, two towering Buddha statues made of rocks and limestone were destroyed by the Taliban in 2001.

In the beginning, Umar had no intention of destroying the idols. But the founders of the Taliban were angry with the UN providing protection money for a UNESCO World Heritage site instead of providing humanitarian aid for Afghanistan. Umar sought the advice of his shura, and Akhund was part of the council that ordered the destruction of the sixth-century statues.

Akhund played a political role in the Taliban government of the 1990s, serving as foreign minister; However, their importance is greater in the development of the organization’s religious identity. He, like Mullah Omar, favored a strict Islamic ideology known as Deobandi. After the Taliban were ousted from Afghanistan in 2001, Akhund maintained an influential presence and spent most of his time in exile in Pakistan. From there he continued to provide spiritual and religious guidance to the Taliban in the 2000s and 2010s. In this role, he ideologically justified the ongoing insurgency against the US and the US-backed Afghan government.

What does his appointment tell us about the Taliban?
A power struggle seems to be behind Akhund’s appointment. Mullah Abdul Ghani Baradar, who held the second position after Omar in the Taliban’s early years before indirectly taking over as leader after Omar’s death, is seen by many experts on Afghanistan affairs as a possible head of the country. Were. But there is political tension between Baradar and the powerful Haqqani network. The Haqqani Network is the Islamic organization that has become the de facto diplomatic arm of the Taliban in recent years and has been successful in garnering support for the group, among other local groups.

The Haqqani is one of the Taliban’s most extremist groups. And the language of Baradar’s recent reconciliation on issues such as women’s rights, working with the international community and apologies to former government members is in contrast to the Haqqani network’s ideology.

Akhund Baradar and Haqqani appear to be a compromise candidate between the network’s supporters. The delay in his appointment – repeatedly deferred to the announcement by the Taliban – could be a sign of internal divisions in the Taliban.

What does Akhund’s appointment mean for Afghanistan?
Akhund is a conservative, religious scholar whose beliefs include restrictions on women and the denial of civil rights to moral and religious minorities. His orders, adopted by the Taliban in the 1990s, included a ban on women’s education, the enforcement of gender segregation, and the adoption of strict religious clothing. All these give an indication of what the future will be like. Despite the Taliban’s soft language, there is a possibility that there may be a return to some of the rules that existed during the Taliban’s earlier regime that included a ban on women’s education.