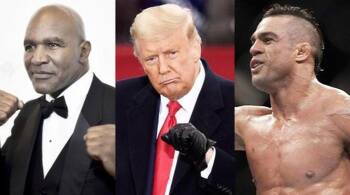 Former US President Donald Trump will commentary on Saturday, September 11, in a boxing match that will also include former heavyweight champion Evander Holyfield. Trump will be accompanied by his son Donald Jr. Through this commentary, he will also pay tribute to the martyrs on the 20th anniversary of the 9/11 attack.

The feed of this boxing match will be available on FITE.TV. To which the former President said in a release, “I love great fighters and their fights. This time I will be part of one such match on Saturday night and will also share my thoughts from near the ring. Don’t forget to watch it.

Let us tell you that earlier this match was to be held in Los Angeles, in which Oscar de la Hoya had to face Vitor Belfort. Holyfield was included on one occasion due to de la Hoya being infected with Corona.

Given Holyfield’s age, the California State Athletic Commission refused permission, leading to the match now being held in Florida. Holyfield will turn 59 next month and hasn’t been in the ring since 2011.

Information about this match has been given through a Twitter handle named FITE TV. It has been told in this tweet that Trump will be seen commentating in the ‘NO HOLDS BARRED’ boxing match. It will be organized by Triller Fight Club. The match will be available to watch on FITE.TV on September 11.

Significantly, Donald Trump has previously hosted boxing matches in the 1980s and 1990s as well. At the same time, he has also been a big name in the world of fights or wrestling. Before becoming the President of America, he has been seen inside the ring many times in the famous International Wrestling WWE.