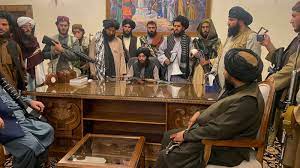 The Taliban has appointed Haji Mohammad Idris as the governor of the Central Bank of Afghanistan. If sources are to be believed, Amarullah Saleh, the former Vice President of Afghanistan, had issued a warning about Idris that the Taliban had appointed a man who laundered black money as the head of the country’s top bank. “Black money launderer Idris facilitates money exchanges between al-Qaeda supporters and the Taliban,” Saleh said in the past.

Please tell that Idris is a resident of northern Javazjan province. He has been dealing with the Taliban’s financial affairs for a long time along with Mullah Akhtar Mansour. It is not yet known how much education he has received. His only ability is that he converts black money into white for the Taliban. Idris has not even read religious books but is knowledgeable about financial matters.

Former Afghan President Ashraf Ghani defended his move to leave Kabul on August 15, saying he chose this route to save the country’s capital from bloodshed. In a tweet, Ghani dismissed the widespread allegations of corruption and claimed that he did not take any money from the country. He said that an independent inquiry should be conducted into the matter.

Ghani’s sudden departure was widely criticized in Afghanistan and many other countries. At the same time, the US had blamed Ghani’s move to leave the country for the Taliban’s capture of Afghanistan and the fall of the government before the negotiated agreement.